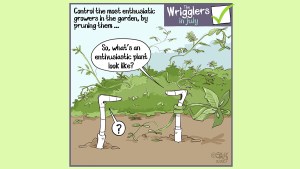 Above the wrigglers gardening cartoon it reads:

Control the most enthusiastic growers in the garde, by pruning them …

The cartoon depicts two worms standing in front of an enthsiatic plant. The plant new growth is leggy and some is wrapped around one of the worm’s throat.

The worm with the tendril wrapped around its throat says, “So, what’s an enthusiastic plant look like? ”
The other worm looks on with disbelief, it says “?”